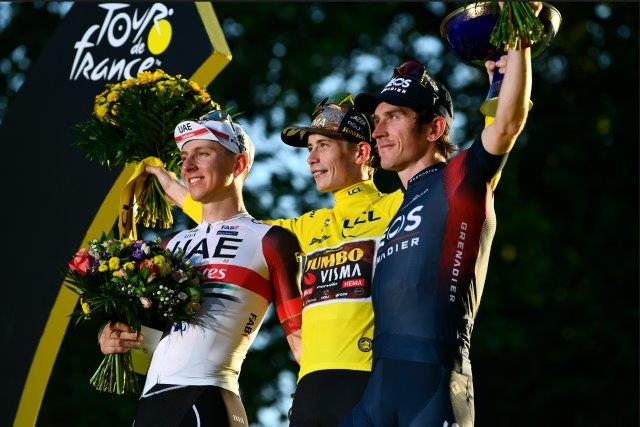 Following news from Warner Bros Discovery Sports that the 2022 Tour de France attracted record-breaking audience engagement across 50 markets in Europe, it has been confirmed that the event also attracted the biggest TV audiences for EBU Members overall in terms of hours viewed since 2015.

The race, which featured an epic duel for the Yellow Jersey between Jonas Vingegaard and Tadej Pogačar, Slovenia’s winner of the last two editions of the Tour, racked up a total number of well over 400 million hours viewed in aggregate for the following EBU Member broadcasters:

EBU Members’ broadcasts were complemented by pan-European coverage on the TV and digital platforms of Eurosport and Global Cycling Network, with Eurosport 1 and Eurosport 2 achieving an overall reach of 37 million viewers.

With Vingegaard emerging as the first Danish winner of the Tour since 1996, after the first three stages were held in Denmark, this year’s race held a particular appeal for Danish viewers. This was reflected in the viewing figures of TV2, the national broadcaster, which won an overall viewing share of 71.9 per cent and an average audience of 685,000 viewers for its coverage (best figures since 1997).

Other notable viewing share figures for broadcasters that are part of the EBU agreement included:

Strong linear coverage by EBU Members was accompanied by comprehensive and innovative digital coverage on their websites, apps, social media pages and OTT/streaming platforms. This included:

“Every year, the subtle combination of free-to-air coverage by generalist EBU Member channels and Eurosport/GCN platforms allows us to showcase the biggest cycling race on Earth to reach a large audience throughout Europe,” commented Julien Goupil, Media and Partnership Director at [Tour organiser] A.S.O. “From Copenhagen where The Tour de France received one of its warmest welcome, to the Champs-Élysées after 21 exciting days of racing, the 2022 edition has thrilled millions of TV viewers on all continents. We are very happy to see such high ratings from EBU members showing the strength of the relationship between the Tour and European fans of all ages and backgrounds and providing all Tour de France stakeholders – hosting cities and regions, partners, participating teams and riders – a fantastic exposure associated with a complete digital ecosystem made of both Le Tour organic platforms and those of EBU Members. This also corresponds perfectly with the results obtained by host broadcaster France Télévisions (41.3 per cent and an average of 4 million viewers every day with an increasing proportion among the youngest).”

“As one of the most popular sporting events, the EBU is more than ever convinced that the Tour de France benefits from comprehensive coverage across Europe through the most popular free-to-air platforms of the EBU provided by its Members, together with Eurosport and Global Cycling Network,” added Frederic Sanz, Head of Cycling at Eurovision Sport. “EBU Members have experienced this year some very strong average ratings and viewing shares, reaching and entertaining more and more fans, and generating increased visibility for sponsors and tourism authorities, with a specific focus this year on the beautiful Danish cities and landscapes where the Tour de France started for the first time ever. Eurovision Sport is absolutely thrilled to have contributed to this overall success.”