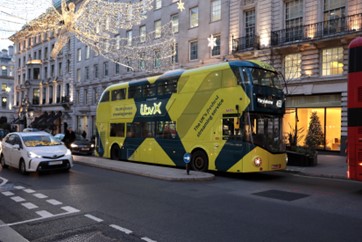 The campaign builds on the advertising creative from Uncommon Creative Studio which premiered during I’m A Celebrity, starring multi-award-winning actors Helena Bonham Carter, Matthew Macfadyen and John Boyega being put through their paces, as they are challenged to improvise their way through different scenarios in the quest to effectively bring to life the UK’s freshest streaming service, driving awareness for the new service.

Other brand activations and innovative partnerships bringing the AVoD service to life, include a special branded metaverse experience in Fortnite Creative, where players can step into new and surprising ITVX themed worlds, devised by ITV-backed Metaverse studio and agency Metavision, which was launched and promoted by YouTuber Ali A (18 million subscribers).

ITVX bus wraps will be running across a number of major cities across the UK, with LED lighting helping the branding to stand out through dark winter evenings.

For the campaign ITV’s Marketing team have identified a target audience ‘Mainstreamers’ – a sizeable audience segment increasingly watching more and more of their TV content via streaming services, and who are primarily interested in big, high quality, mainstream content, which ITV has always excelled at.

This audience segmentation used an innovative fusion of research and first party data to make sure ITV had leading insight into this audience, a project for which ITV won the award for Application and Impact of Data at the prestigious Market Research Society Awards this week. It also allows ITV to map a view of the whole market directly into our owned media channels.

The campaign will run across TV, cinema and digital video platforms, and outdoor, with creative work from ITV Creative, with the media choice selected by ITV’s media agency Essence, to reach the ‘mainstreamer’ target audience with a high impact and frequency during the launch period.

In ITVX’s launch year, ITV Marketing will ramp up promotion of single show titles, with off air campaigns to drive fame and consideration in optimal channels, based on econometric modelling.

Now with over 10,000 hours of content in high definition, ITV Marketing will also be using first party data to deliver optimal campaigns across digital platforms and CRM, to make targeted recommendations to viewers making full use of the richer range of content to draw from. With over 30 million registered users, and ITV’s own proprietary customer data platform alongside upskilled capabilities developed across the past two years, ITV is in a strong position to take the vast array of content and deliver personalised campaigns at scale, through paid digital opportunities and through owned CRM.

“Across the board, we have really focused on high impact creative in media channels which reach our ‘mainstreamer’ audience – viewers who are warm to ITV, and increasingly consuming content through streaming,” commented Jane Stiller, ITV’s Chief Marketing Officer. “The campaign is informed by extensive work with our research and data teams to really understand what viewers want – which is new exciting content, as well as depth and breadth in titles. Those insights lead our marketing messages across the creative work, emphasising the thousands of shows and films on offer on ITVX, and that the service has more new shows for free than anywhere else.”