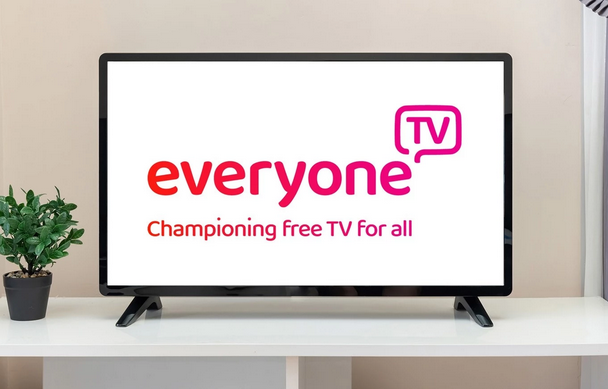 Everyone TV is the new name for Digital UK, the organisation that brings free British television to UK viewers and the platform operator of Freeview, and of its satellite twin, Freesat.

Owned by the UK’s leading public service broadcasters, the change in name is designed to reflect a revised mandate for the organisation: To lead the evolution of free, universal, high-quality television, in a way that protects and strengthens the social glue provided by Britain’s broadcasting heritage.

Effective immediately, Everyone TV, a name intended to reflect the vital importance of cherishing the universal nature of television, will guide Britain into a new era where audiences can still watch their favourite PSB TV shows without charge whatever platform they choose.

Freeview and Freesat, which together offer 100 per cent coverage of the nation and serve 18 million British homes, will retain their consumer brand identities. But the overarching company now has a name that underlines its mission to ‘champion free TV for all’, serving every British household in a bid to safeguard the nation’s shared love of unifying, magical television moments.

To herald the next chapter in the company’s history, there will be a new top tier of Directors at Everyone TV under CEO Jonathan Thompson, who is introducing his senior team to the industry at the Outside the Box 2023 conference in London.

“Among our tasks in the years ahead is defusing a threat to universality that could catch the industry by surprise,” advised Thompson. “From the Queen’s funeral to the victorious England women’s football team, shared moments of sorrow and joy, drama and poignancy, are currently brought into every British home simultaneously by our world-leading television industry. But that could be lost in a fragmented future world of TV viewing. We at Everyone TV will lead the evolution of free television services in the UK so that universality – in all senses of the word – remains a fundamental principle.”

Digital UK was founded in 2005 by the broadcasters and transmission companies of Britain with the purpose of masterminding the switchover from the analogue aerial system that had brought television into our homes since the first days of BBC TV in the 1930s to the Digital Terrestrial Television (DTT) that we use today.

“Digital UK has come a long way since it delivered digital switchover over a decade ago,” noted Caroline Thomson, Digital UK’s Chair of over ten years. “The new name very much reflects the organisation’s changed role in managing all the UK’s free TV services to the benefit of viewers and wider society. With a strong track record of delivering results, a culture built on partnerships and collaboration, and support from public service broadcasters, I’m confident it can continue to serve UK audiences and the wider broadcasting ecosystem.”

“Over the coming years, the vital role of television in information and education as well as entertainment will need careful oversight to protect it,” asserted Thompson. “Having the right senior leaders in post at Everyone TV is critical to ensuring we can achieve our strategic objectives of successfully delivering the evolution of our free TV platforms for a digital age and supporting the health of free-to-view TV for the long term.”

Everyone TV will have a team with what it says is unrivalled experience in the areas of the TV industry that make all else possible in Britain’s world-beating broadcasting sector.

As of mid-February 2023, Everyone TV will also take up a new home in Triptych Bankside behind Tate Modern, the venue for the Outside the Box conference on the future of free-to-view TV.